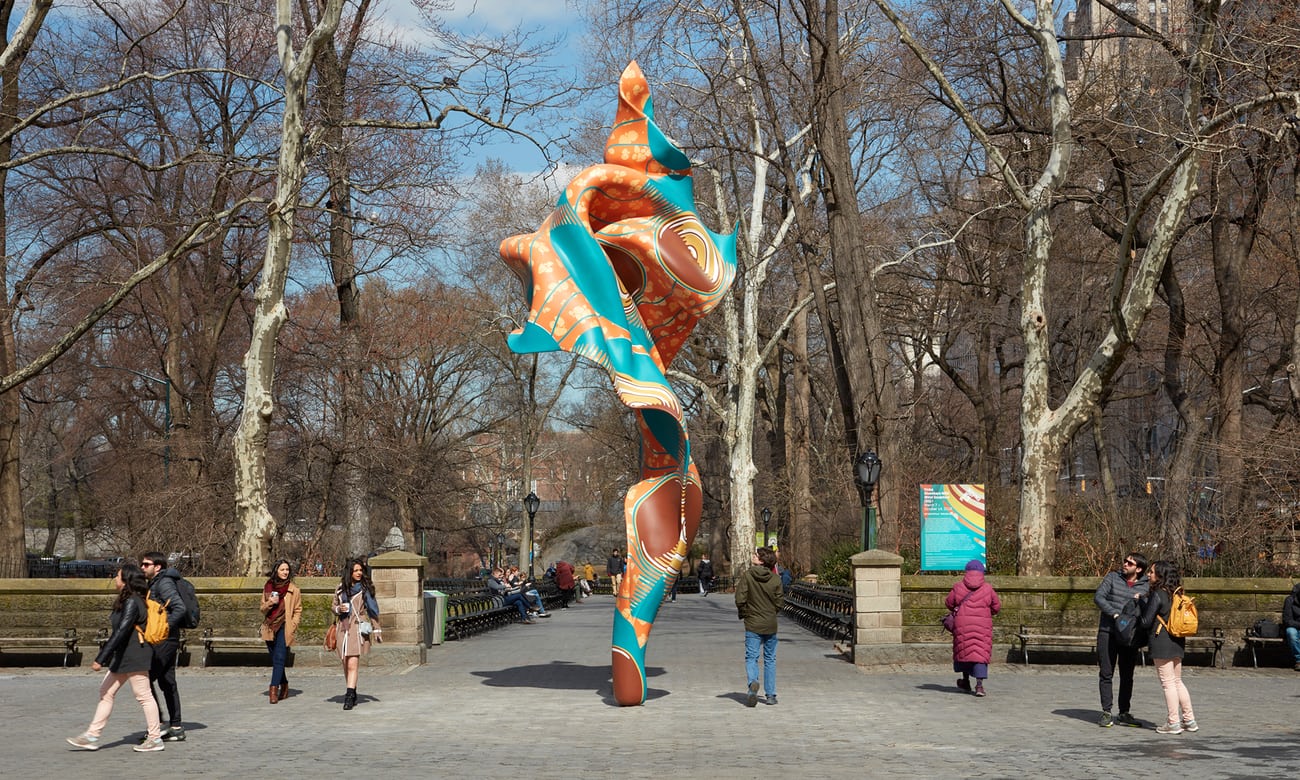 The British Nigerian artist Yinka Shonibare MBE makes work that trades on the razzle-dazzle aesthetic and deceptively complex history of Dutch Wax cloth, the colorful, printed fabric so beloved in West Africa that it’s often mistakenly assumed to be indigenous to the region. Actually, it’s a product of imperialism and cross-cultural exchange: Designed and manufactured mostly in the Netherlands and England, the cloth emerged as a failed experiment in selling factory-produced copies of traditional Javanese batiks to the people of the Dutch East Indies; when Indonesians rejected the wares, European merchants successfully marketed them to colonial Africa.

The fabric raises questions about the slipperiness of authenticity and the complexity of modern African identity that for Shonibare—born in London, raised in Lagos, living in London—are personal (he calls himself a “postcolonial hybrid”). In his work, he has used Dutch Wax to make frilly period garb for the headless mannequins that figure in his outlandishly theatrical tableaux, book jackets for his British Library project (comprised of titles by non-British authors vital to the English canon), and sailcloth for his ship-in-a-bottle replica of Lord Nelson’s HMS Victory, which for a time he displayed on a plinth near Nelson’s Column in London’s Trafalgar Square.

Recently, Shonibare has abstracted the material into his Wind Sculptures, towering, static fiberglass constructions, painted with Dutch Wax motifs and made to look like massive diamonds of fabric flapping in the wind (the design process involves hair dryers). Connected to the ground by a single point, they are exuberantly anthropomorphic, a little bit ballerina, a little bit Dr. Seuss. His latest in the series, the first made with a new 3-D modeling technique that allows for more flamboyant undulations, goes up on March 7 in Manhattan courtesy of the Public Art Fund. It will grace the southeast entrance to Central Park at Fifth Avenue and 60th Street through the summer.

The Trafalgar Square endeavor was site specific; the Wind Sculptures are, per the artist, speaking by phone from the United Kingdom, a “metaphor that can work anywhere.” They’ve appeared in Washington, D.C., Lagos, Chicago, and London. The latest iteration—spheres of yellow ochre and red and a web of orange on a turquoise ground—faces off against Augustus Saint-Gaudens’s gilded bronze statue of Union Army General William Tecumseh Sherman (he of Sherman’s March and the brutal Indian Wars), and calls to mind our national debate over monuments. Shonibare considers his project “the alternative monument,” as much a depiction of the wind that fills the sails as the sails themselves, an attempt to embody invisible forces, to sculpt absence. “It is possible to make something which is the opposite of creating a monumental volume celebrating some war hero,” he says. “This is colorful. This is friendly. This is not about jingoism of any kind.”

Situated just a few blocks up from Trump Tower, stronghold of a leader who stokes the flames of xenophobia, the sculpture also functions as “a visual celebration of the presence of migrants.”

“It’s like: We are here,” Shonibare says, laughing. “We are staying. Either you want to party with us, or you don’t. But we’re not going anywhere.”