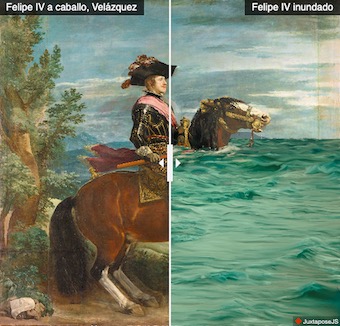 During the UN Climate Summit COP25 in Madrid, WWF and the Prado Museum have joined forces to demonstrate the impacts of climate change through their art masterpieces

Together with the museum experts, WWF has selected four masterpieces from the Prado Museum’s collection for this climate change awareness campaign:

The doctered artworks have been created to warn the world about rising sea levels, the extinction of species, the social drama of the climate refugees or the impacts on rivers and crops due to extreme drought.

The joint initiative is an original way to shake up the climate change debate, engage society in the fight against this global threat, and demand urgent actions and commitment to all political actors present during the coming weeks at the UN Climate Summit.

We hope that the campaign will reach every corner of the planet. This action is part of a series of planned activities and initiatives that WWF will be holding during the Climate Summit to demand a greater ambition from governments to ensure that the global temperature does not exceed an increase of 1.5ºC.