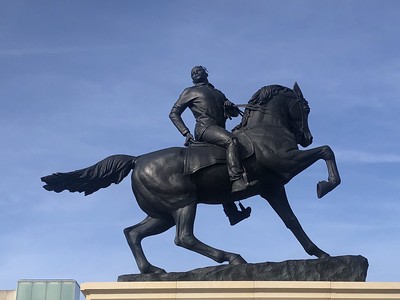 Dozens of statues are being removed as part of Black Lives Matter protests. Artists and critics have some provocative ideas for what to do with the sites.

Statues of historical figures associated with slavery including King Leopold II and Christopher Columbus were graffitied, burnt, beheaded and toppled this week as part of Black Lives Matters protests.

Among the statues that fell was that of British merchant and slave trader Edward Colston (1636-1721), which was pulled down and rolled into Bristol harbour on Sunday 7 June. There have since been several proposals for a new artwork to be installed in its place.

Guardian art critic Jonathan Jones suggested replacing the statue with ‘a big bold artwork that recreates the cargo deck of [Liverpool slave ship] the Brookes’ to demonstrate the horrors of slavery. Colston worked for the Royal African Company, which transported over 80,000 men, women and children from West Africa to the Caribbean, almost 20,000 of whom died during the voyage.

On his Instagram, artist BANKSY said the act of destroying the statue should itself be commemorated.

‘We drag him out the water, put him back on the plinth, tie cable round his neck and commission some life size bronze statues of protestors in the act of pulling him down,’ he said.

Over 50,000 people have also signed a petition to replace the statue of Colston with one of Paul Stephenson, a black worker who led a boycott of the Bristol Bus Company in 1963 in protest of racist hiring practices.

Statues of other contentious figures are falling fast. A statue of Robert Milligan, an 18th-century slave trader, was taken down in London Tuesday, and there have been renewed efforts to have Oxford University take down its statue of Cecil Rhodes, who espoused white supremacist beliefs.

A 150-year-old statue of Belgium’s King Leopold II, whose brutal rule over Congo in the late 19th century caused the deaths of millions, was removed from a public square in Antwerp on Tuesday after being set ablaze last week. An online petition with over 75,000 signatures is calling for the removal of all Leopold II statues around Belgium.

In the United States, statues of Christopher Columbus, who killed and enslaved indigenous peoples en masse, were toppled in St Paul, beheaded in Boston and attacked in Richmond this week. Protestors also pulled down the statue of Confederate General Williams Carter Wickham in Richmond, Virginia. Richmond’s City Council decided on Friday 5 June to remove four Confederate statues on Monument Avenue, though efforts to remove the six-story-tall monument to Confederate general Robert E. Lee were blocked by courts.

Richmond, formerly the capital city of the Confederacy, is already home to a powerful rejoinder to statues associated with racism. Kehinde Wiley‘s bronze sculpture Rumours of War (2019), a young black man in a hoodie and Nike sneakers on horseback, has been permanently installed outside the Virginia Museum of Fine Arts. The work responds to a statue of Confederate General J.E.B. Stuart, who strikes a similar pose less than a mile away.

When the statue was unveiled in December last year, Wiley told NPR that statues of confederate leaders are ‘designed to terrorise and menace.’

‘Simply by virtue of announcing on the same scale, in the same language, in the same bronze and stone that a young black man can be positioned in the same monumental language, it allows you to see someone who’s oftentimes relegated to the peripheries elevated to the status of an icon, to the scale of a god,’ he said. —[O]

Image : “‘Rumors of War’ by Kehinde Wiley. Richmond, VA” by iagoarchangel is licensed under CC BY-NC-SA 2.0