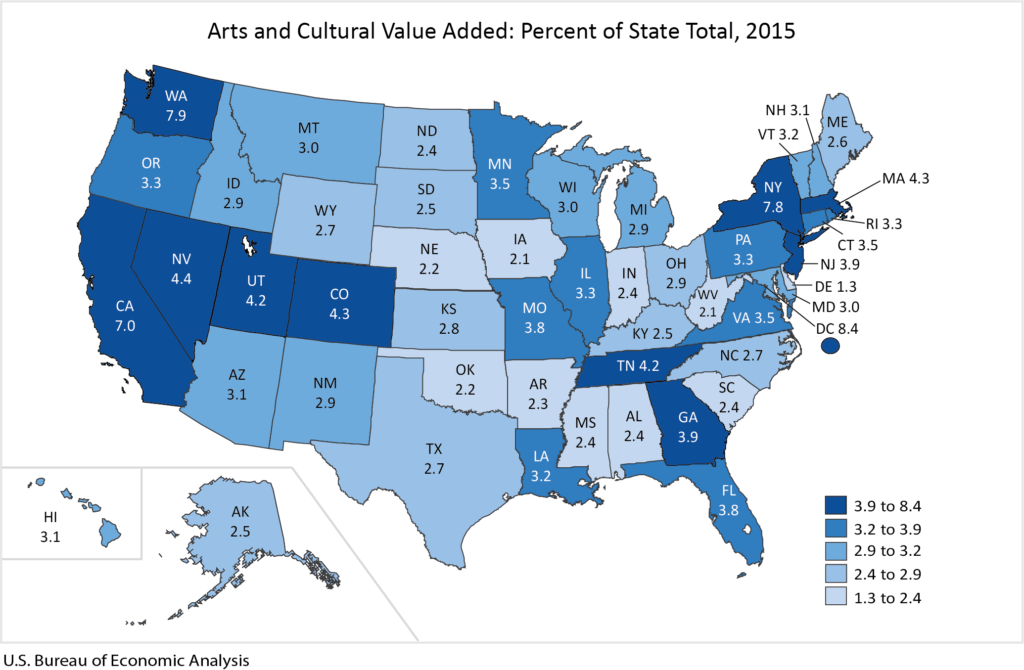 The arts add twice as much to the US economy than the agriculture industry.

The arts contribute more than you might expect to the US economy, says a new joint report from the US Commerce Department’s Bureau of Economic Analysis and the National Endowment for the Arts. The arts generate $763.6 billion per year, or 4.2 percent of the GDP, according to the study, which presents statistics gathered between 1998 and 2015.

The US also exported $20 billion more in art than it imported, providing a positive trade balance. All told, the 4.9 million people employed in America’s creative industries earned $372 billion in total compensation for 2015.

“The robust data present in the [report] show through hard evidence how and where arts and culture contribute value to the economies of communities throughout the nation,” said NEA Chairman Jane Chu in a statement. “The data confirm that the arts play a meaningful role in our daily lives, including through the jobs we have, the products we purchase, and the experiences we share.”

Adjusted for inflation, economic activity related to arts and culture increased 4.9 percent nationwide in 2015, and 2.6 percent on average between 2012 and 2015. Meanwhile, 45 states and the District of Columbia saw growth in the arts and cultural industries in 2015.

Here are a few more compelling facts highlighted in the report:

A map showing the percentages of state economies that are made up by arts and culture. Courtesy of the US Bureau of Economic Analysis.