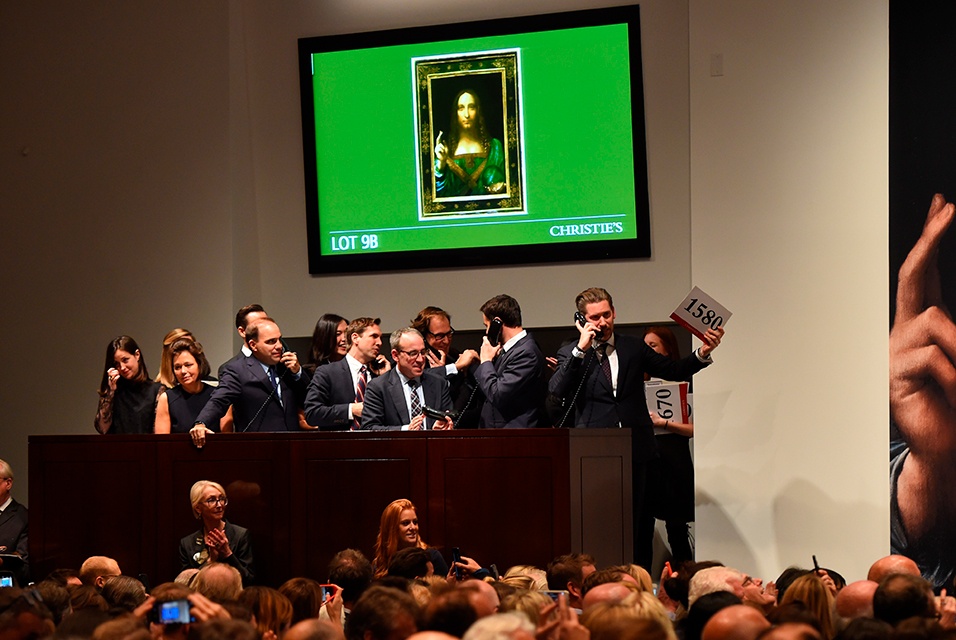 NEW-YORK, AFP (via ArtDaily), 17.11.2017. – A triumph of marketing over aesthetics? Or the legitimate cost of owning a Da Vinci? The sale of a Renaissance portrait of Jesus Christ for nearly half a billion dollars has stunned the art world.

Its quality and condition are debated and isolated doubts may even linger over its authenticity. But few dispute that the $450.3 million price tag for reputedly Leonardo da Vinci’s “Salvator Mundi” was anything less than historic.

“Unbelievable,” said Georgina Adam, an editor-at-large at The Art Newspaper whose book on excesses in the 21st century art market comes out next month. “If you were in for a trophy work of art, this was it,” she said. “It was a now or never opportunity and the market spoke. And the price is huge. It’s colossal.”

For now, the identity of the buyer remains a mystery. The 19-minute sale came down to two clients outbidding each other by telephone to exhilarated gasps from a packed room at Christie’s in New York.

Speculation has focused on a select group of billionaires — perhaps in Asia — with enough cash and artistic interest to consider $450 million an affordable splurge.
Others could be museums in the Gulf. The Louvre, for example, which opened last week in Abu Dhabi? Although some Western art experts wonder if Middle Eastern buyers would not have balked over a piece of Christian iconography.

“This was a once in a lifetime opportunity. This is the X-factor,” said Loic Gouzer, the chairman of Christie’s post-war and contemporary art department who secured the painting, put up for sale by a Russian billionaire.

Price, not aesthetics
“That’s the enigma of Leonardo,” said Gouzer. “The magic of the artist.”
But others were less sure.

The Mundi is not the best Da Vinci painting in the world, nor is it in immaculate condition. Decades and decades of its life are unaccounted for. The panel on which it was painted split and cracked. Some have criticized its cleaning and restoration.

“Best case, it’s by Da Vinci, it’s in terrible condition and it’s not a gripping masterpiece and it’s got a big question mark about its provenance,” said Todd Levin, director of a New York private art advisory. “The common denominator here is price — not aesthetics, subject matter or place in the history of art,” says Darius Spieth, a professor at Louisiana State University.

“I take my hats off to them,” said Levin of Christie’s. “They got somebody to take on faith that this thing was worth half a billion dollars.” The auction house waged what even critics acknowledge was a clever marketing campaign, trading on name recognition of Dan Brown’s best-selling thriller “The Da Vinci Code” and the 2006 blockbuster movie starring Tom Hanks.

That other Leonardo — the movie star Di Caprio — appeared in a promotional video. It was also the first time an Old Master was included in a post-war and contemporary sale that attracts the world’s biggest art spenders.

‘Show off’
“From a marketing perspective, it was a very smart move, no doubt. But it’s kind of turning a little bit the art market into ‘The Da Vinci Code’,” said Spieth.

The auction house pitched it as “the greatest and most unexpected artistic rediscovery of the 21st century” — declining to mention that its seller went to court charging he was ripped off into buying it for $127.5 million in 2013. The work had been exhibited in London in 2011 after years of research to document its authenticity after it was found in 2005, mistaken for a copy.

In the build-up to the sale, Christie’s flew the painting all over the world, saying nearly 30,000 people saw it in Hong Kong, London, New York and San Francisco. With fewer than 20 Da Vincis by the Italian’s hand generally accepted to exist, Christie’s also traded heavily on its rarity.

The sale was indicative of the trend in fabulously wealthy buyers dropping eye-watering sums on trophy acquisitions, albeit at a time when art funding is declining in the West.
“It’s almost intangible,” says Rachel Pownall, professor of finance at Maastricht University School of Business and Economics, of its worth.

Da Vinci, Pownall says, is so famous that his work exerts a unique pull on the super rich searching for the ultimate status symbol. “I’ll venture to say that the person who purchased this Da Vinci was not a lover of Renaissance art,” one US art appraiser told AFP. “They’re wealthy so they need to own valuable art to kind of show off.”

Christie’s employees take bids for Leonardo da Vinci’s “Salvator Mundi” at Christie’s New York November 15, 2017. A 500-year-old work of art depicting Jesus Christ, believed to be the work of Renaissance master Leonardo da Vinci, sold in New York on Wednesday for $450.3 million setting a new art auction record, Christie’s said. “Salvator Mundi,” which the auction house dates back to around 1500, sold after 18 minutes of frenzied bidding in a historic sale, the star lot of the November art season in the US financial capital. TIMOTHY A. CLARY / AFP & ArtDaily.