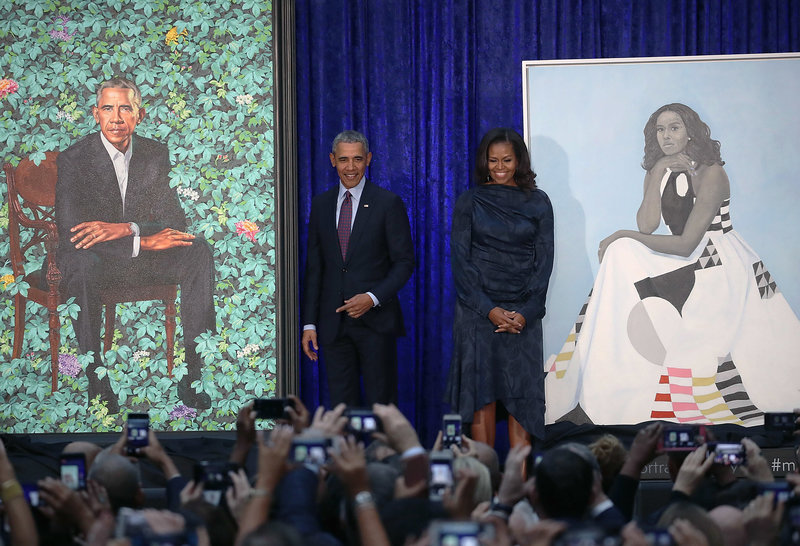 Kehinde Wiley painted Barack Obama sitting in a chair, elbows in his knees, leaning forward with an intense expression. The background, typical of a Wiley painting, is a riotous pattern of intense greens.

Amy Sherald, a Baltimore-based artist, painted Michelle Obama sitting in a floor-length gown, chin on her hand, looking directly at the viewer with a calm, level gaze.

The paintings, like the presidency they honor, are a historic first. Wiley and Sherald — both already famous for their portraits of black Americans — are the first black painters to receive a presidential portrait commission from the museum.

Celebrities from Shonda Rimes to Steven Spielberg, former administration officials from Josh Earnest to Eric Holder, and members of the media filed into the Portrait Gallery’s expansive, glass-covered central courtyard for the ceremony. Kim Sajet, the director of the gallery, told the audience that a portrait was not truly finished until a viewer, a member of the public, had a personal encounter with it.

Then came the unveiling — quite literally, as fabric covers were pulled off the portraits on a small stage.

“Wiley typically portrays people of color posing as famous figures in Western art,” the Portrait Gallery writes. “Through this practice, he challenges the visual rhetoric of power that is dominated by elite white men.”

Barack Obama said he admired how Wiley’s photos “challenge our conventional views of power and privilege.”

But he said he rejected Wiley’s ideas that involved him, for instance, riding a horse.

” ‘I’ve got enough political problems without you making me look like Napoleon,’ ” he remembered telling Wiley. ” ‘You’ve got to bring it down a touch.’ And that’s what he did.”

“How do you explain that a lot of that is just simply not true?” Wiley said, when he took to the lectern. Then he got more serious.

Sherald, “known for her stylized, archetypal portrayals of African Americans,” survived a heart transplant in 2012, the museum notes. “A personification of resilience herself, Sherald conveys the inner strength of her subjects through a combination of calm expressions and confrontational poses,” the gallery writes.

“I am a little overwhelmed, to say the least,” Michelle Obama said in a speech, after helping Sherald reveal her work. “As you may have guessed, I don’t think there is anybody in my family who has ever had a portrait done, let alone a portrait that will be hanging in the National Gallery — at least as far as I know, Mom,” she said. “But all those folks who helped me be here today, they are with us physically and they are with us in spirit.”

“I’m also thinking of all the young people, particularly girls and girls of color, who … will see an image of someone who looks like them hanging on the wall of this great American institution,” she said. “I know the kind of impact that will have on their lives, because I was one of those girls.”

It was a point Sherald echoed minutes later, when she emphasized that her portrait of Obama was conceptual and archetypal, bigger than just one model.

“You exist in our minds and our hearts in the way that you do because we can see ourselves in you,” she said, turning toward Michelle Obama.

The National Portrait Gallery, a member of the Smithsonian Institution, has worked with outgoing presidents to commission a new portrait of each one since 1962.

More recently it began collecting portraits of first ladies as well. The National Portrait Gallery, a member of the Smithsonian Institution, writes:

“Official portraits are interesting beasts because they are, of course official: they signify the status and attainments of the person portrayed. But they also are deeply personal, even revelatory, portrayals that say something of the character of the man or woman who shows their face to the public. The style of the portrait – the pose, the colors, the setting, as well as facial features (in the 19th century stern and forbidding was definitely the default expression) – all convey a measure of the sitter.”

The gallery’s portrait of Bill Clinton, by Nelson Shanks, was controversial after Shanks said he’d hidden a reference to the Monica Lewinsky scandal in the canvas. A different portrait of Clinton, a Chuck Close painting of the former president’s grin, is on display in the museum.

The new paintings of the Obamas will be on view to the public beginning Tuesday.

Wiley’s painting of former President Obama will be permanently installed in the “America’s Presidents” exhibit (The Portrait Gallery has the “only complete collection of presidential portraits outside the White House,” the museum said in a statement.)

Sherald’s painting of Michelle Obama will be on display through November in the museum’s “Recent Acquisitions” section.