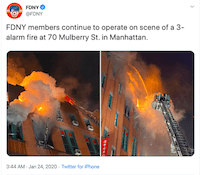 The Museum of Chinese in America on Friday said that a fire has likely destroyed all of its priceless 85,000-piece collection telling the story of Chinese migration to the United States.

According to officials at the New York City museum, the fire, which on Thursday night consumed part of the building holding the museum’s archive, likely did not do the damage on its own. Instead, officials are worried about water damage. The museum’s president told NBC News that firefighters are barring museum workers from entering the building, leaving the officials with little hope of salvaging items that will only degrade further in the following weeks.

The museum’s president, Nancy Yao Maasbach, told the New York Times on Friday that “one hundred percent of the museum’s collection, other than what is on view,” had been destroyed.

The building that burned is historic on its own. A former public school that educated immigrant children for many decades, the Chinatown building has more recently been used to host community groups, nonprofits, a dance studio, and a senior center, in addition to the museum’s archives. According to NBC New York, the fire injured several firefighters and a 59-year-old man who suffered from smoke inhalation when it erupted Thursday.

“I know the neighborhood is in shock tonight,” Mayor Bill DeBlasio, who called the building’s senior center a “pillar of the Chinatown community,” tweeted Thursday. “We’re going to help the community get through this.”

Museum officials said that 35,000 documents had already been digitized before the fire, mitigating some of the loss. And the artifacts on display at the museum, which is located a few blocks away, are safe. But as the Times noted, the museum often displayed copies of documents—in order to keep the real artifacts safe in the archives.

Image : Twitter feed from the FDNY displaying images of the fire destroying the Museum of Chinese in America, Chinatown, New York.