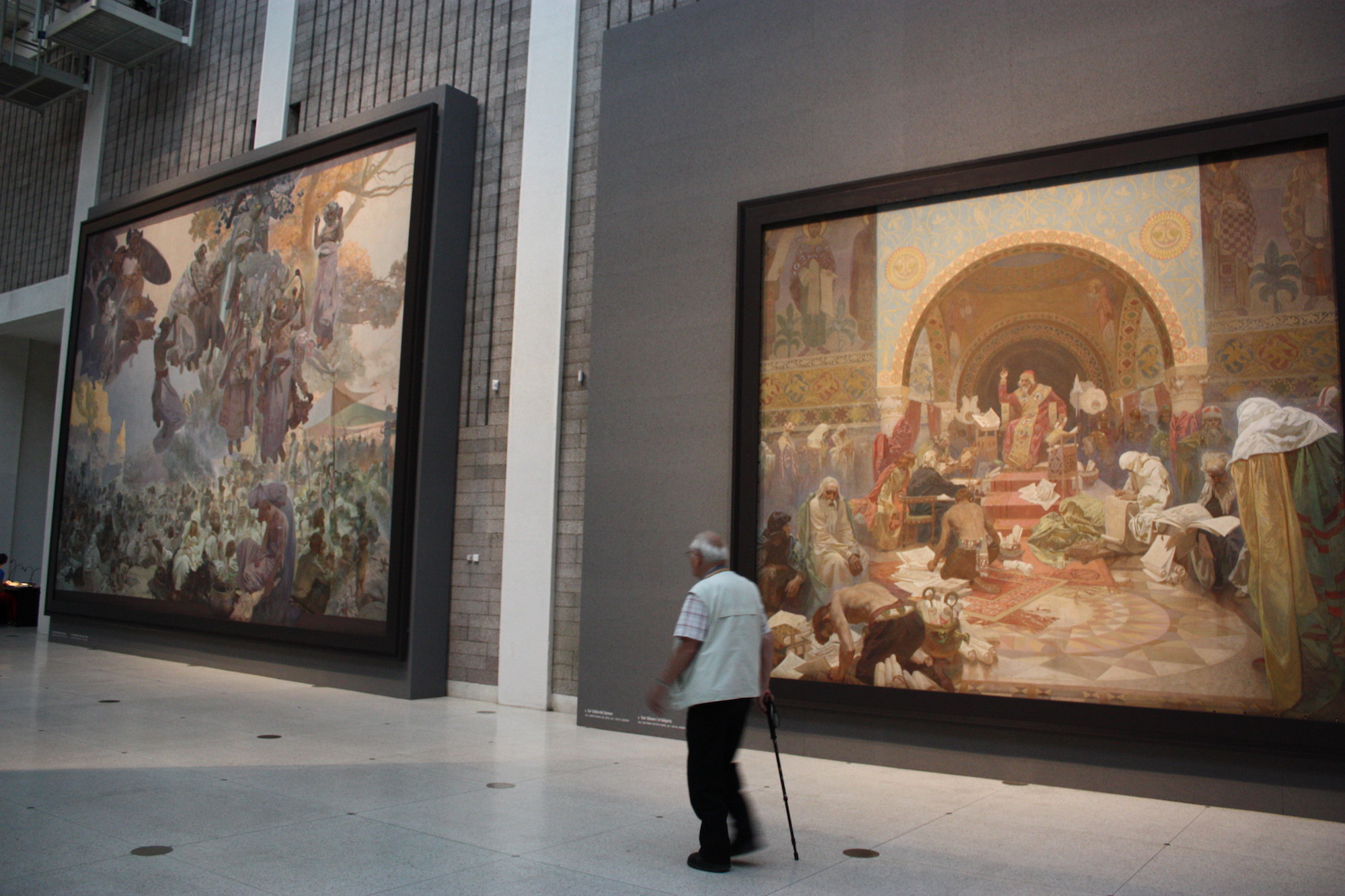 The Prague City Council approved a plan to renovate and expand the Lapidarium at Výstaviště in Prague’s Holešovice district. The building will be the permanent home to Alfons Mucha’s Slav Epic, a cycle of 20 large-scale paintings.

Where the paintings would be displayed has been an issue for years. They were at Veletržní palác, part of the National Gallery, from 2012 until the end of 2016, but are not currently on display.

Výstaviště is currently undergoing extensive changes and the next step is the complete renovation of the Lapidarium, which is currently home to the sculpture exhibition of the National Museum.

Along with the renovation, a new modern building will be completed to meet all the requirements for the location to host the entire Slav Epic.

“I see it as the long-standing debt that the city owes to Alfons Mucha. The Slav Epic is a magnificent work, and it should have its own dignified home,” Prague Mayor Adriana Krnáčová (ANO) said on the City Hall website.

The Prague Institute of Planning and Development (IPR) was asked to find suitable locations for a permanent home for the Slav Epic.

A site at Těšnov, the site of a former railway station that is now a green space, were most suitable but would require a change to the territorial plan. Another site on the opposite side of Těšnov was also considered. Výstaviště was then examined as an option.

“The advantage of this solution is that in two and a half years, the Slav Epic might have the permanent home it deserves, and we will also support the development of Výstaviště because the Epic in that space will certainly attract a large number of people,” Krnáčová said.

The Lapidarium was built for The General Land Centennial Exhibition in 1891.

The search for a location has been going on for many years.

The Prague 1 district previously announced that it wants to build a modern, gold-tone oval gallery adjacent to Štefánikův most (Štefánik Bridge) to house the Slav Epic, though the city was not receptive to the idea.

The pedestal of the former Stalin Monument at Letná, the National Monument at Vítkov, Letohrádek Hvězda, Colloredo-Mansfeldský palác, the Klementinum and Letohrádek královny Anny had also been suggested at one time or another.

Before the paintings were moved to Prague, they were on display at a chateau in the town of Moravský Krumlov, where they were seen by some 20,000 people per year. The city of Moravský Krumlov had attempted to have the paintings returned, and said the cycle would not exist if the town had not protected and preserved it during and after World War II, as Mucha was not highly regarded by either the occupying Germans or the communists.

That effort to get them returned had not been successful, and Prague now claims ownership.

The Slav Epic was painted between 1910 and ’28. The largest measures over 48 square meters. Mucha devoted the latter half of his artistic career to this work. The idea was formed in 1899, while he was working on the design for the interior of the Pavilion of Bosnia-Herzegovina, which had been commissioned by the Austro-Hungarian government for the Paris Exhibition of 1900. In preparation, he traveled widely through the Balkans, researching the history and customs of the Slavs.

A key role in creating the famous cycle of paintings was played by Mucha’s American patron Charles Crane, who offered him $100,000 to finally paint the works.

The Slav Epic was created in Mucha’s rented studio at Zbiroh Castle, and the finished canvases were turned over to the City of Prague as they were completed.

In 1919, the first 11 canvases were displayed in the Prague’s Klementinum. In 1921, five of the paintings were shown in New York and Chicago. In 1928, the complete cycle was displayed for the first time in Veletržní palác.

Image :The Slav Epic by Alfons Mucha as seen in 2012 in Veletržní palác of National Gallery in Prague. Kenyh Cevarom/Wikimedia Commons.