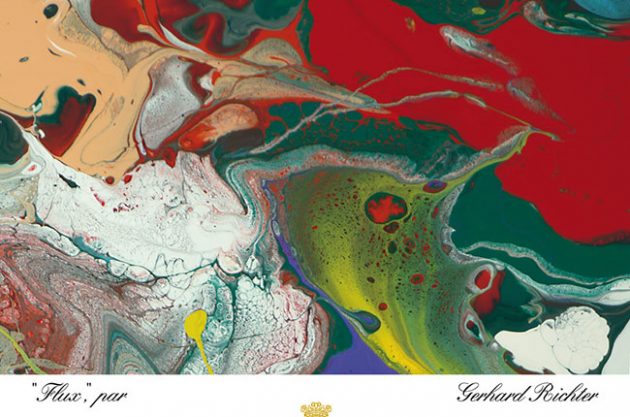 Gerhard Richter’s Mouton Rothschild 2015 label uses a process that the German artist calls ‘Flux’, which is described as a piece of work that combines painting and photography and is ‘both random and carefully prepared’.

Richter’s label design continues Mouton’s tradition of commissioning bespoke artwork for its grand vin, which it first did for the 1924 wine and has done for every vintage since 1945.

This year’s Mouton label was chosen by the next-generation owners of the estate, Camille and Philippe Sereys de Rothschild and Julien de Beaumarchais de Rothschild.

Born in Germany in 1932, Richter is known for his “photo paintings” and abstract works and his style has been linked to artists such as Picasso.

Richer’s 1986 painting “Abstraktes Bild” set a record auction price for a work by a living artist in October 2015, when it sold at Sotheby’s for £30.4 million.

How Richter created the Mouton 2015 label

Richter used his “flux” technique to develop the label design, according to Mouton.

“This involves spreading enamel paint on a plate of plexiglass on which he then presses a glass plate. When the process reaches completion, he finally fixes the plates one on top of the other”, the Bordeaux château said.

“Before that, however, he photographs the still fluctuating colours when he considers their composition to be momentarily harmonious: that is how he created the label for Mouton.”