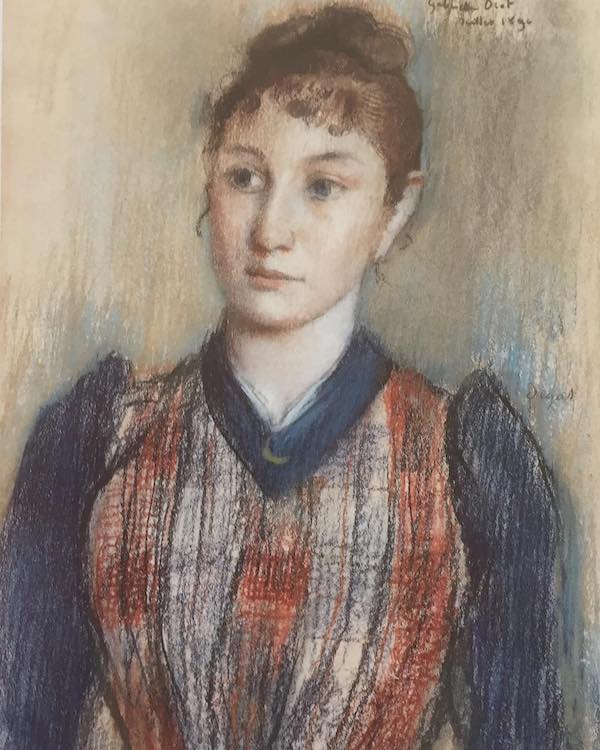 An important pastel by Edgar Degas looted by the Nazis in Paris in 1940 ‘Portrait of Gabrielle Diot’, 1890, owned by the renowned art dealer Paul Rosenberg is sought by the family for restitution. Rosenberg a major art dealer and patron of Henri Matisse and Pablo Picasso hung the Degas above his desk at Galerie Paul Rosenberg, 21 Rue de La Boetie in Paris, until 1940, after which it was confiscated by agents of the Nazis under orders of German Ambassador to France, Heinrich Otto Abetz, along with numerous other works. Research has concentrated on the owner of a gallery in Hamburg, where the trail and its ownership history since 1940 has gone cold.

The location of ‘Portrait of Gabrielle Diot’ remained unknown until 1974, when Hamburg-based art dealer, Mathias F. Hans, the owner of Galerie Hans, Hamburg, brokered the sale of the pastel to an alleged Swiss buyer. The painting next appeared in public in December 1987, when Elaine Rosenberg, Paul Rosenberg’s daughter-in-law, found the Degas listed for sale in an art magazine, with the Hans Gallery in Hamburg as the advertised seller. It transpired that Mr Hans’ original Swiss buyer wished to sell the Degas and returned to Mr Hans to facilitate the sale.

The work’s provenance was included in advertising for the sale, listing Galerie Paul Rosenberg in its ownership and exhibition history, and confirming the identity of the picture as the missing Degas. However, when contacted by Mrs Rosenberg in 1987, who described her connection to the picture, Mr Hans explained that confidentiality rules prohibited the disclosure of the current possessor’s name, but promised further information on the artwork’s whereabouts. Mrs Rosenberg contacted Mr Hans in the days following, only to be told that the possessor had removed the Degas from his gallery and disappeared.

The location of the pastel was again unknown until 2003, when Mr Hans continued to attempt to sell the picture through a number of intermediaries in Denmark, Germany, California, New York and Venice. However, all sale attempts between 2003-07 failed.

In 2016 Art Recovery International was appointed to locate and recover the work on behalf of the Rosenberg heirs. ARI undertook several meetings with Mr Hans in 2016 and 2017 in an effort to gather information about the current possessor of the Degas and its location. Dialogue broke down after the dealer demanded a payment on behalf of his client.

“The professional art market does not look favourably on dealers who demand ransoms for the return of Nazi-looted artworks. Mr Hans’ behaviour belongs to a bygone age and he risks his reputation, and the trust of his clients, by continuing to deceive.”

With high-profile cases such as the Cornelius Gurlitt hoard placing scrutiny on the German government’s treatment of historic claims, Art Recovery International appealed to the German Ministry of Culture and Media, seeking their advice and assistance in reaching a resolution. However, requests to meet were rebuffed.

Reacting to the Ministry’s response, Christopher A. Marinello said:

“It was a half-hearted effort at best. There is so much more the German authorities could investigate here including purchase, tax and export records. Germany is not only responsible for the actions of their predecessors in 1940, but responsible for the standards it projects to the market today. When the government doesn’t lead by example, it gives the art market an excuse to do the bare minimum in halting the trade in looted artwork.”

Art Recovery International is seeking information from collectors, dealers, and other art world professionals across the globe who may have seen or know the whereabouts of this looted Degas. Information will be treated with the strictest confidence.

Image : the looted pastel by Degas, via Artlyst.com