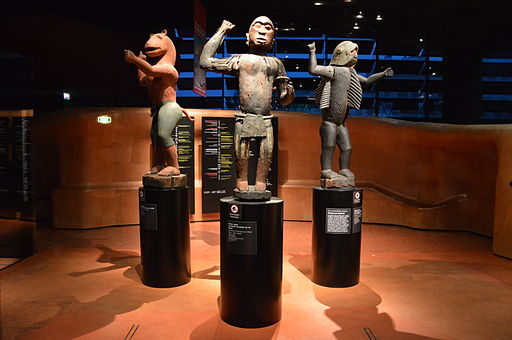 France will return 26 works of art to Benin more than a century after it took them from the west African nation.
President Emmanuel Macron ordered the pieces returned “without delay” to the former French colony, according to a report commissioned by the French government.
The pieces have been in France’s possession for 126 years, ever since they were taken from the palace of King Behanzin, who was deposed and exiled when France claimed the region as a protectorate in 1894.
Macron’s decision to return the artworks stems from a report authored by French historian Bénédicte Savoy and Senegalese writer and academic Felwine Sarr. French collections now house at least 90,000 pieces originating from sub-Saharan Africa, the report said, with around 70,000 works just in the Quai Branly — a museum featuring art indigenous to Africa. It recommended that the French government return stolen artifacts to their countries of origin.
“These works can be presented to the Beninese public and to the international public as part of the ambitious project of museums carried by the Republic of Benin,” the statement said.
And these 26 pieces may just be the start.
The report suggested a three-phased approach. The first, the return of “several symbolic pieces whose return has been requested fro a long time by various African nations.” Then, an international inventory of stolen pieces. And the final phase would include African nations submitting claims of restitution.
The Elysée Palace said there will be a meeting at the start of 2019 between African and European nations to develop a new policy on the exchange of stolen artifacts. His hope is to ensure “African youth have access to its own heritage and the common heritage of humanity in Africa,” the palace said, and “build a new intellectual connection between France and Africa.”
CNN, Madeline Holcombe/Saskya Vandoorne, 24.11.2018: “France to return 26 stolen artifacts to Benin”