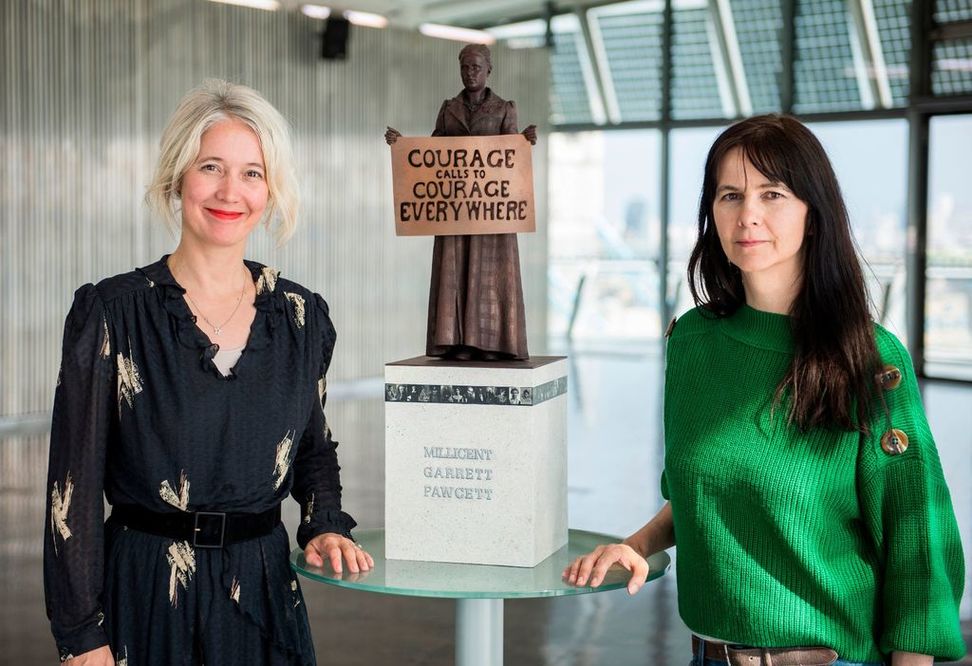 The first statue of a woman, and the first to be created by a female artist, went up in London’s Parliament Square on Tuesday. For 150 years, monuments to only male statesmen have populated the square, including Winston Churchill, Nelson Mandela, Abraham Lincoln, Mahatma Gandhi and seven others. Now, the pioneering suffragist leader Millicent Fawcett stands among them.

British Prime Minister Theresa May spoke at the unveiling ceremony, noting: “I would not be standing here today as prime minister, no female MPs would have taken their seats in Parliament, none of us would have had the rights and protections we now enjoy, were it not for one truly great woman: Dame Millicent Garrett Fawcett.”

It is the centenary of women’s right to vote in the UK after a hard-fought campaign that culminated at the same time that the First World War ended. In Fawcett’s hands reads the plaque, “Courage Calls To Courage Everywhere,” a line she used to describe the death of fellow suffragist Emily Wilding Davison at the 1913 Epsom Derby.

“When you think of the great people in Parliament Square and when you realize that not one of them is a woman, it sort of begs the question, are we saying there haven’t been incredible women in the past? That our country hasn’t been built on the back of great women?” London mayor Sadiq Khan said at the opening event.

Turner Prize-winning artist Gillian Wearing created the monument. She said, “I hope those viewing the work will be able to appreciate this along with being able to celebrate Millicent Fawcett along with all the other suffrage supporters and activists also honoured.”

The woman who began the campaign for the statue, Caroline Criado Perez, also crusaded to get Jane Austen on a banknote.

The statue was commissioned by the Mayor of London with 14-18 NOW, Firstsite and Iniva to commemorate the centenary of the Representation of the People Act 1918, through the government’s national centenary fund.

More on the making of the sculpture, and related online exhibits, can be viewed on Google Arts and Culture.

Deputy Mayor for Culture, Justine Simons, and artist Gillian Wearing stand with the statue of Millicent Fawcett. Image: Caroline Teo. Office of the Mayor of London.