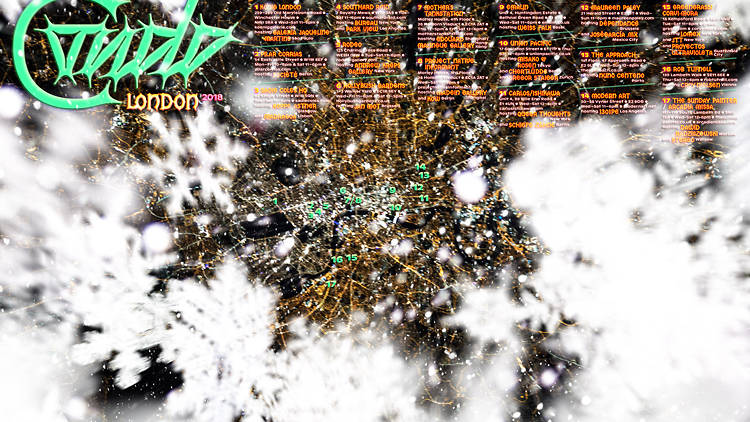 You know what’s better than one art gallery? 46 art galleries. Especially when they’re all getting together and collaborating to put on one enormous city-wide art show. That’s what Condo is: a whole bunch of world-class contemporary galleries from places as far afield as New York, Guatemala City, Warsaw and Shanghai setting up shop in 17 of London’s best young galleries. The guest gets a place to exhibit in London, the host gets to show their artists’ work alongside. It’s an art party, a festival, an art fair:  a giant hippy love-in for the international art scene, and we’re all invited to hit that peace pipe along with them. Plus, it has more than doubled in size since its debut in 2016, so there’s even more to see.

2. It has some of the world’s most exciting young galleries

If you’re looking for a handy list of London’s most adventurous, cutting-edge art spaces, you could do worse than looking at Condo’s participating galleries, which include The Sunday Painter, Arcadia Missa and Carlos/Ishikawa. The international galleries are no slouches either, like Dawid Radziszewski and Stereo from Warsaw, 1301PE from Los Angeles, Queer Thoughts from New York and Misako & Rosen from Tokyo. There are more established London gallery names – like Maureen Paley and Pilar Corrias – involved too. The plans for Condo are announced late, so you won’t really know what you’re going to get until you actually show up at the gallery. But what you can know for sure is that if you want to see what the best, edgiest galleries in the world are up to (and how London measures up) this is your chance.

Condo is spread across the city, from Kennington to Mile End, so there’ll be a fair whack of travel involved if you want to hit every gallery this weekend, but don’t stress if you miss some of them out because all shows run until well into February.

The rules change from space to space, so expect the unexpected. The bus fare and the walking will be worth it, because not only do you get to see some of the world’s best art, but in ways that you’ve never seen before. Well, you’ve got to work off that Christmas bulk somehow.