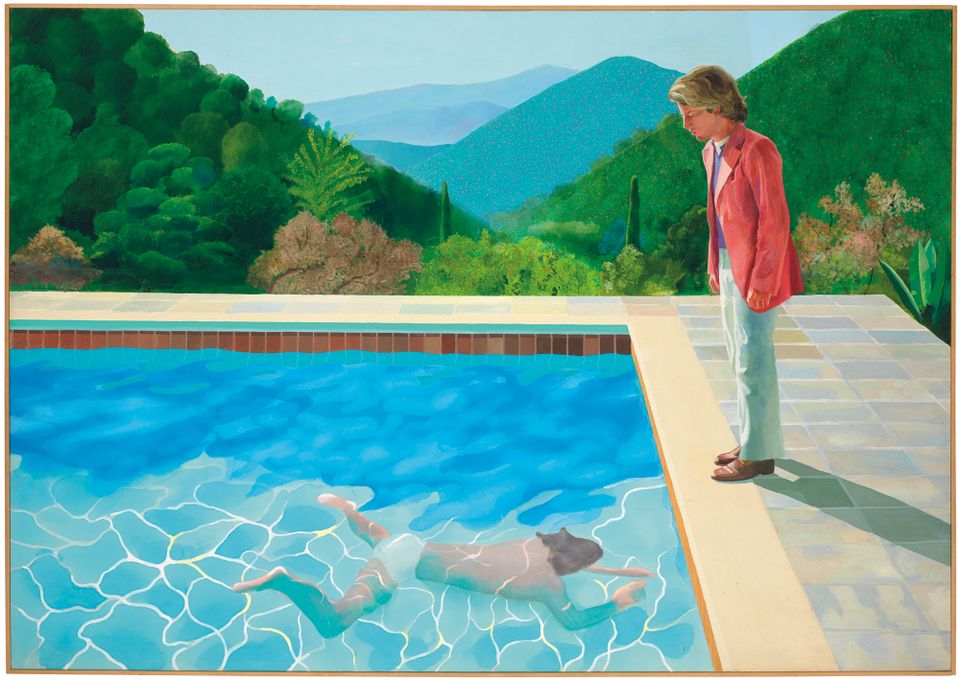 Christie’s announced today (13 September) that it will offer David Hockney ’s 1972 painting, Portrait of an Artist (Pool with Two Figures), in its evening post-war and contemporary art sale in New York on 15 November. Should it fetch near its estimate of $80m, it will be the highest auction price ever paid for a work by a living artist by some distance—the current record is held by Jeff Koons, whose Balloon Dog (Orange) sold for $58.4m Christie’s New York in 2013.

At nearly double the Koons record, the price tag is punchy. But Alex Rotter, Christie’s co-chairman of post-war and contemporary art department, thinks it warranted, as the painting combines the artist’s most recognised themes: “the glittering abstraction of the pool, and the emotional complexity of the double portrait.”

Surprisingly, given the estimate, the painting is not guaranteed—as yet.

Hockney’s double portraits and pool paintings rarely come to auction, as the majority already reside in museums. And, depicting a swimmer watched by a standing figure—Hockney’s teenage muse, Peter Schlesinger—Portrait of an Artist (Pool with Two Figures) is both. Cinephiles might recall it was the cover image of the 1974 cult film, “A Bigger Splash”, which chronicled Hockney’s five-year love affair with Schlesinger. More recently, it was included in the expansive travelling retrospective that closed at New York’s Metropolitan Museum of Art earlier this year.

Rotter says that Hockney’s institutional and market visibility over the past few years proves he is finally being “properly canonised” on a broader scale. This particular painting, however, has passed through the hands of just a few private collectors including David Geffen, co-founder of DreamWorks Studios. The Christie’s sale will be its auction debut.

The secondary market for Hockney’s work has been on the rise for several years. According to Artnet’s price database, the artist’s total auction sales were $43.3m last year, which is up from $35m in 2016. In May this year, the auction record for Hockney was surpassed twice within the space of an hour at Sotheby’s New York—first, Piscine de Medianoche (Paper Pool 30) (1978) sold for $11.7m (with fees), quickly beaten by Pacific Coast Highway and Santa Monica (1990) which went for $28.4m. Yet Christie’s estimate for Portrait of an Artist (Pool with Two Figures) is nearly triple that.

Rotter says the estimate is justified given the recent auction and institutional spotlight on the artist, but also the broader rise in interest in figurative art. “When you think of Hockney’s work, these concepts [pool scenes and portraiture] instantly come to mind independent of one another,” he says. “But when they come together they form a kind of holy grail that we see here in Portrait of the Artist (Two Figures).”

The painting will be exhibited at Christie’s in Hong Kong, London and Los Angeles before being sold in New York on 15 November.