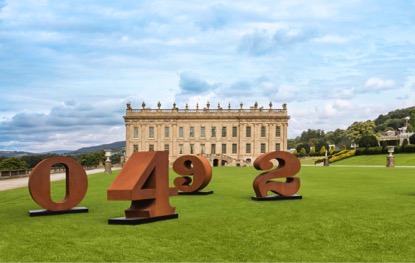 Currently in its 12th edition, Beyond Limits is an annual Sotheby’s exhibition of monumental outdoor sculpture set in the stunning gardens of Chatsworth House in Derbyshire. It is now firmly established as one of the most important events in the calendar for the display and sale of modern and contemporary outdoor sculpture.

Beyond Limits is in 2017 celebrating the radical moment when freedom of expression met with unparalleled scale and ambition, by focusing exclusively on post-war American sculpture. The 22 sculptures on display this year are beautifully installed against the backdrop of the rolling hills of Derbyshire. Artists include Richard Serra, Robert Indiana, Tony Smith, Julian Schnabel, Isamu Noguchi, Sol LeWitt and Claes Oldenburg & Coosje van Bruggen.

Starting with a moment of powerful transition in the early sixties, this year’s exhibition explores how American sculptors broke away from tradition, moving through abstraction, to minimalism and pop art – all on a revolutionary scale.

Among this year’s works will be “Source” (1967), by Tony Smith. First exhibited at the Dokumenta IV in Kassel in the summer of 1968, Source is among Smith’s most dynamic large-scale sculptures, despite weighing over 12,000 pounds. Another remarkable piece is Big M by Wendell Castle (1971). Made from gel-coated fibreglass, red automobile paint, wire and steel tubing, the giant bulbous M-shape works as a playful frame into the landscape. One of the first designers to challenge the boundaries between utility and fine art, Wendell is considered the father of the American art furniture movement.

On the fun yet monumental side, visitor’s appetite will probably open (or not) when seeing Leaning Fork with Spaghetti and Meatball”, by Claes Oldenburg and Coosje van Bruggen (1994). As Claes Oldenburg says :  “I am for an art that takes its form from the lines of life itself, that twists and extends and accumulates and spits and drips, and is heavy and coarse and blunt and sweet and stupid as life itself.”. We say : Bon appétit !

Image : Robert Indiana, One Through Zero, 1991, Corten. Credit : Sotheby’s/Chatsworth House, Beyond Limits 2017. Extracts of an article written by Anne-Céline Jaeger for 1858.