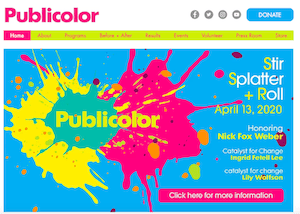 The artist’s design will be executed by students from Publicolor, an arts and education program, and Manhattan East School for Arts and Academics.

Soon you won’t have to go to the Metropolitan Museum of Art or the Museum of Modern Art to see artwork by Carmen Herrera. By the end of May, one of her abstract paintings will be visible from Franklin D. Roosevelt Drive in Upper Manhattan.

Publicolor, an arts and education nonprofit, announced on Tuesday that its students will create a large outdoor mural designed by Ms. Herrera at Manhattan East School for Arts and Academics, a middle school in East Harlem.

“The whole idea is to bring the power of visual beauty to neighborhoods where there is very little and where parents are just not taking their kids to museums,” said Ruth Lande Shuman, the founder of Publicolor.

The mural, which will be titled “Uno Dos Tres,” is an adaptation of “Diagonal,” a painting by Ms. Herrera from 1987. The design, Ms. Herrera said in a statement, is a “variation on a theme,” not a re-creation of her earlier work. The new piece takes into account the specific features of the mural’s site and its location near the highway. “It needed something strong and bold and different to compete with all the visual noise,” she said.

Students from Publicolor, with help from some peers at the Harlem school, will begin work on the project on April 18. The goal is to complete it in time for the artist’s 105th birthday on May 30. When it’s finished, the black and white painting will measure 54 feet wide and 17 feet high. Public service painting projects are a part of Publicolor’s four-to-six-year “continuum” program. Its participants, at-risk students from underserved communities, also receive academic support, life skills training and career counseling.

This is the second collaboration with Ms. Herrera. In 2017, the year after her critically acclaimed solo exhibition at the Whitney Museum of American Art, program participants and local students painted an indoor mural based on Ms. Herrera’s 1952 painting “Untitled” at New School for Leadership and the Arts in the Bronx.