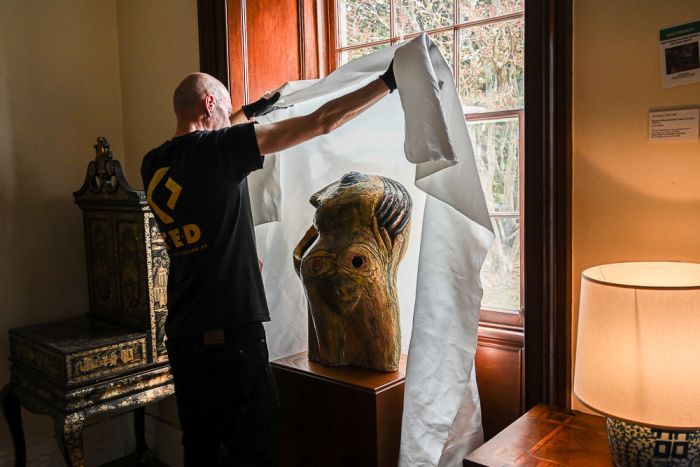 As fire ripped along the ranges surrounding the historic Bundanon Homestead near Nowra in the NSW south coast hinterland, Deborah Ely was anxious.

It was Saturday, January 4. The previous day, the Bundanon Trust chief executive made an unprecedented call to remove some of the priceless artworks kept at the property. It was a sage decision.

“Fire came to within a kilometre,” Ms Ely told the ABC during a visit to the property this week. “It was really close, you can see it on the ridgeline here.”

Yet when the fires came through, not everything valuable had been evacuated. It was impossible to act that quickly.In one drawer, the ABC discovered a sketch by Picasso, as well as a work on paper by John Olsen and two sketches by Sid Nolan.

Sitting in front of the estate, surrounded by upturned wicker and timber furniture tossed from the balcony to minimise the fire risk, Ms Ely pointed to the burnt leaves on the dry grass at her feet.

The outlying acreage on the 1,100-hectare property was torched. But the 1800s sandstone homestead — which, before the fires, acted as a gallery — was saved. In fact, no buildings were lost. Ms Ely praised the local firefighters for their work, who she said put “significant resources” into protecting the property.

The homestead, on the banks of the Shoalhaven River, was once home to one of the forefathers of Australian modernism, Arthur Boyd. Boyd was one of the last generation of Australia’s most celebrated artistic dynasties. In his later years, he painted the river from his property hundreds of times. In 1993, six years before his death, he gifted Bundanon to the nation. In the ensuing decades, it has grown to become more than an historic homestead.

Bundanon Trust occupies three properties, two once owned by Boyd and a third owned by fellow artist and Boyd’s brother-in-law Sid Nolan. Today, the property doubles as an artist’s retreat, allowing artists and writers to take up residence onsite while developing their works. There is also accommodation for groups in the acclaimed Glenn Murcutt building.

The initial evacuation of the most valuable artworks included canvases by the Boyd family and Nolan but this week all the remaining artworks from the $43-million collection were moved out.

Bundanon Trust’s collections and exhibitions manager Jennifer Thompson said important decisions were being considered about whether the works would return to the property at all. The existing fire vault, built just over 20 years ago, is fire-proofed to only two hours.

“It was purpose-built in such a way that it maintains its temperature and humidity to certain standards with minimal air conditioning required [in order to] house the collection in the event it would be safe during a bushfire,” she said. “But the bushfires we’ve experienced this season have been more intense, they’re unprecedented, so it did feel like: should we take that risk? Would we be safe in the devastating fires that we’ve seen?”

The artworks are being expertly stored in Sydney at a cost of $500,000 for two years, should that amount of time be required.

“We’re thinking about what is our new normal,” Ms Thompson said.

Bundanon has been experimenting with using digital prints on canvas as stand-ins for artworks that are unavailable.

“We can bring some works back if we need to, to tell the story of the Boyd family property but maybe at the end of spring, start of the next fire season we may need to take them out again. This is a new scenario for us.”

Construction is due to begin next month on a new accommodation wing and art gallery. At a cost of $31.6 million, the building has been funded by the Federal Government with assistance from the NSW Government.

“We know our vulnerability is our location in the bush, so the gallery and storage will be subterranean, which will eliminate the fire risk for us,” Ms Ely said.

Despite the site’s continued vulnerability, she is resolute on maintaining Boyd’s legacy in his former home.

“You can’t move everything away from the bush,” she said. “People want to see the incredible landscapes Arthur painted and they want to see those paintings in situ.It’s where Arthur intended them to remain. But it is important we think really radically about how we protect and provide for art collections in the future.”

Bushfire Building Council of Australia chief executive Kate Cotter said Bundanon had no choice but to be a “trailblazer” as there was no special building code for nationally significant buildings.

“So those organisations will need to get individual advice about how to protect their existing buildings and artworks, or how to build a new building to protect the contents,” she said. “There is a real gap in knowledge and there’s certainly no best-practice advice for those types of buildings.”

The homestead remains closed as the bushfire threat remains, but the team hopes to reopen it as soon as possible.

Image credit : An artwork being expertly wrapped prior to removal from Bundanon following the catastrophic bushfires in Australia. ABC News, Brendan Esposito