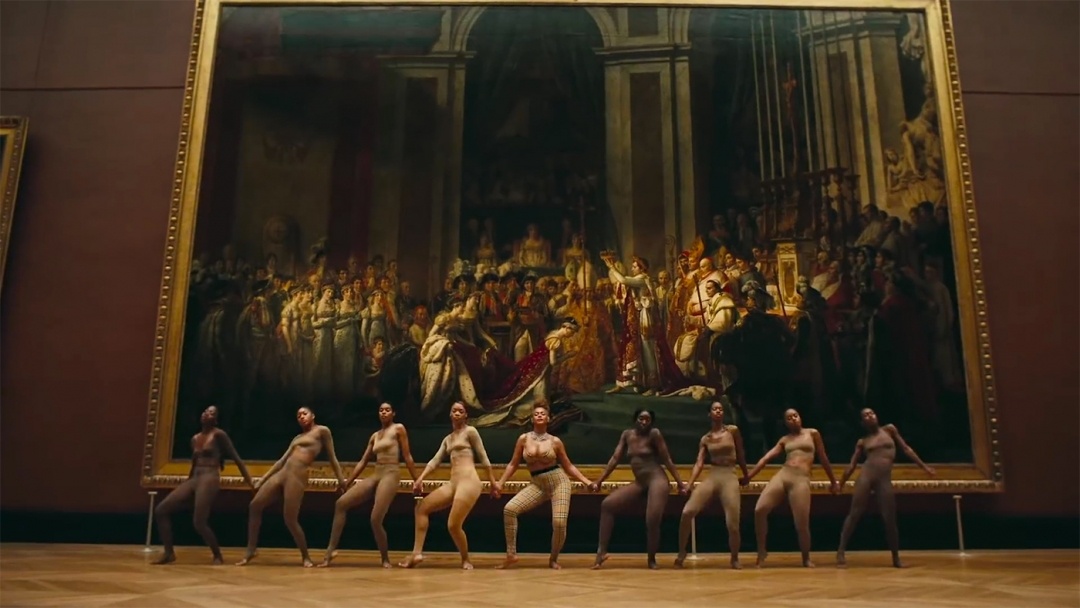 On Saturday, at the end of a concert in London, Beyoncé and Jay-Z surprised the crowd with a new album and a new music video for its lead single, which finds the couple behaving regally around the Louvre. The video for “Apeshit,” directed by Ricky Saiz, marks the Carters’ return to the Parisian museum, where they famously posed in front of the Mona Lisa back in 2014.

While Leonardo’s alluring painting is, unsurprisingly, the music video’s star artistic attraction, many major works from the Louvre collection play supporting roles, from other masterpieces of European art including Jacques-Louis David’s monumental “The Coronation of Napoleon” (1807) and Théodore Géricault’s “The Raft of the Medusa” (1818–19), to antiquities including the Venus de Milo (101 BCE), the Winged Victory of Samothrace (190 BCE), and the Great Sphinx of Tanis (c. 2600 BCE). Slightly less iconic works also make appearances, most notably “Portrait of a Black Woman” (1800) by Marie-Guillemine Benoist and Rosso Fiorentino’s “Pietà” (1540). Even I.M. Pei’s Louvre Pyramid gets screen time in some of the video’s only exterior shots.

The artworks in “Apeshit” often have thematic resonances with the lyrics with which they’re juxtaposed, or visually echo the dance movements performed in front of them, but the video’s real thematic anchor is the Louvre itself. The former royal palace is the perfect setting for the debut music video by pop music’s royal couple as an official duo, “The Carters.” Not only does the video’s setting enshrine them in the glowing aura of European monarchy (further underlined by “The Coronation of Napoleon”), it also works in a contemporary context. After all, who but Beyoncé and Jay-Z could secure exclusive access to the busiest museum in the world to shoot a music video? Here, Beyoncé and Jay-Z are flaunting the Louvre as a kind of supreme status symbol.

But the video also represents something of a missed opportunity. Rather than familiar examples of European painting and Greco-Roman statuary, why not pose more difficult questions about what’s in the coffers of European museums? The shots of Benoist’s “Portrait of a Black Woman” and those in which the couple flanks the Great Sphinx of Tanis begin to hint at such issues, but more could have done in this vein. How much more compelling and challenging would it have been to see shots of Beyoncé and Jay-Z in the Pavillon des Sessions, where the Louvre lumps together artifacts from Africa, Asia, the Americas, and Oceania? Or amid the Assyrian reliefs in its Department of Near Eastern Antiquities at a time when the Assyrian artistic heritage continues to be threatened in Iraq and Syria? It’s indisputably striking (and amazing) to see Beyoncé at the center of a line of dancers moving in perfect synchronicity beneath David’s “Coronation of Napoleon,” but it also seems like a pretty obvious pick. Given free reign of the Louvre, you’d hope the Carters would have had more adventurous taste.

Hyperallergic, Benjamin Sutton, 18.06.2018: “Beyoncé and Jay-Z Return to the Louvre in New Music Video, Picking the Greatest Hits… But the pop music royals stick to the museum’s main attractions in “Apeshit.””

Image : Beyoncé and her dancers in front of Jacques-Louis David’s “Coronation of Napoleon”, via Youtube /Hyperallergic.