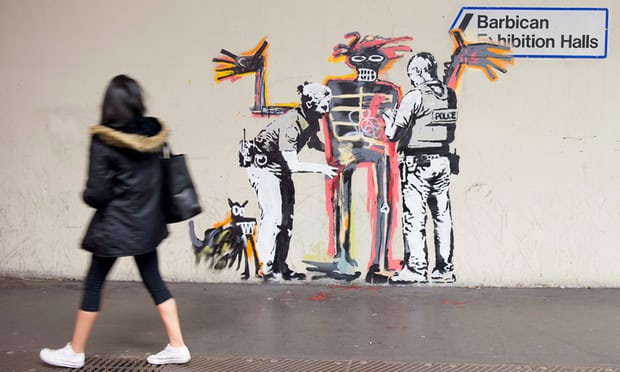 When Banksy pays homage to Jean-Michel Basquiat ahead of a retrospective organised at Barbican Center, it cannot go unnoticed.

From Sept.21st, the Barbican will host “Jean-Michel Basquiat : Boom for Real“, the first retrospective of the artist in the UK. Over 100 works by the artist will be part of the exhibition : private and museum pieces, along with rarely seen archive material and photographs. It will be the 40th anniversary of Basquiat’s death next year, yet the artist has never been so popular than today. Not only the artist’s highest price at auction was achieved last May with a 110.5m USD sale, but street art is very much in demand too, with buoying interest from all horizons, geographies and ages. “Jean-Michel Basquiat : Boom for Real” is set to be a hit. You should book your tickets sooner rather than later if you want to attend.

The exhibition raised a few eyebrows on the street art side, however. Two murals appeared not far from the Barbican walls in a fortnight. They are paying homage to Basquiat but in the witty, controversial way known to Banksy. On the first one, two english police officers search a Basquiat-type skeleton-man ; on the second one, people are queuing to have a go at a London wheel with Basquiat-crown shaped cars. Banksy explained his two works on his Instagram account by saying how ironical it is that the Barbican center, usually so prone to erase graffitis, now celebrates the most famous graffiti artist of all. Also, that a black graffiti artist probably has more chance to be greeted by the police than to be exhibited in the museum.

Nonetheless, the exhibition will certainly be worth a visit. It will run until Jan.28, 2018.

Image credit : One of the two new murals by Banksy near Barbican Centre. Photo : David Mirzoeff/PA