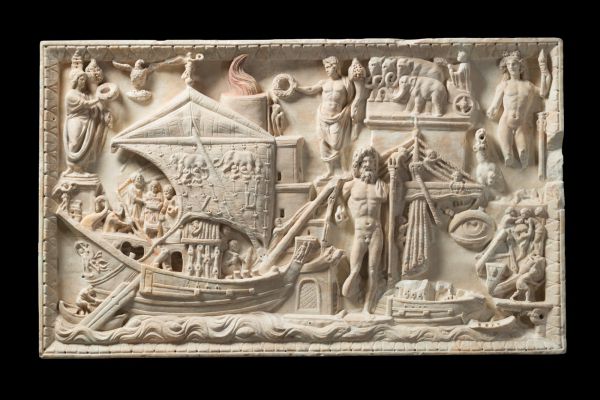 ARTNET NEWS, Naomi Rea, 15.01.2020 : “Hidden Away for 50 Years, an Astonishing Collection of Classical Art Owned by a Secretive Italian Family Will Finally Go on a World Tour”

It could be the most important exhibition of 2020.

An astonishing collection of Greek and Roman sculptures is about to go on view in Rome after being hidden for decades. The private collection, which rivals those in the world’s great museums, has been stuck in storage for half a century until its aristocratic owners reached a landmark agreement with the Italian government. The deal has paved the way for a world tour of highlights of the collection.

The Torlonia Collection is one of the most important collections of classical sculpture still in private hands. Only a few people have ever glimpsed the 620 works in storage. Even the co-curator of the exhibition, veteran art historian and former director of the Getty Research Institute in Los Angeles, Salvatore Settis, had never seen the sculptures in person before taking on the job.

Settis tells Artnet News that his first visit to see the collection was “surprising, rewarding, and promising beyond belief.” Settis is co-curating the exhibition with archaeologist Carlo Gasparri, who has been working on it for years. They have chosen 96 statues, which will go on view in April at the the Palazzo Caffarelli in Rome. The new exhibition venue in the city’s Capitoline Museums has been modernized by the architect David Chipperfield.

The Rome exhibition will be the first leg of a world tour. The foundation has not announced which museums in the US and Europe could host the collection. After the tour, the collection is due to go on show in a new Torlonia Museum in Italy.

The Torlonia family built a vast fortune during the 18th and 19th centuries through administering the Vatican’s finances. Their collection is the stuff of legend among art historians because the family has kept it private for so long. Most experts only know it from a 19th-century catalogue.

In 1875, then Prince Alessandro Torlonia set up a private museum, making the collection visitable by special appointment at a former granary on the Via della Lungara. But it has been largely inaccessible since it was put into storage by one of his successors after World War II.

The bulk of the collection was assembled by acquiring entire collections from other Italian aristocratic families in financial straits. Other pieces were excavated on the Torlonia family’s own land. Settis and Gasparri explain that the exhibition will focus on how it is a “collection of collections.”

“Those collections, in turn, had within them a significant number of works from earlier collections, dating back to 16th-century Rome,” the curators explain. “What we will put on show, therefore, is not just a representative selection from the Torlonia Collection, but also a cross-section of the history of collecting antiquities in Rome from the 16th through to the 19th centuries.”

Before going on display, the sculptures have been researched and cleaned. Their conservation, which is supported by the Italian luxury brand Bulgari, has revealed new insights into classical sculpture.

The conservator charged with overseeing the project, Anna Maria Carruba, has been working on the sculptures since 2016. She tells Artnet News that a marble relief depicting a harbor still has traces of its original painted surface. Classical sculptures were often brightly painted, but it is rare to find evidence of the original pigments which usually fade over time, and were sometimes cleaned off by collectors who preferred pristine surfaces. Carruba explains that traces of original pigments include: “Blue for the sea, red for the fire of the lighthouse, and green and yellow on the frame.”

Carruba says that recording historic interventions was her most challenging task, although some of them are significant in their own right. The celebrated Baroque sculptor Gian Lorenzo Bernini restored a Greek statue of a resting goat, for example.

The Italian government has long wanted to increase access to the storied collection. For 40 years politicians been trying to convince the family to put the collection on public display but they have had difficulties finding a venue. Three separate museum projects were discussed but nothing came of them.

In 2014, the head of the family, Alessandro Torlonia, established a foundation to manage the collection and, in 2016, a year before he died, the aristocrat finally signed an agreement with the Italian government. Culture Minister Dario Franceschini hailed the agreement as “the fruit of authentic collaboration between the public and private spheres in the interests of culture.” The foundation is now run by Torlonia’s grandson, Alessandro Poma Murialdo.

“The Torlonia Marbles. Collecting Masterpieces” will be on view April 4 2020 through January 10, 2021 at the Palazzo Caffarelli in Rome.