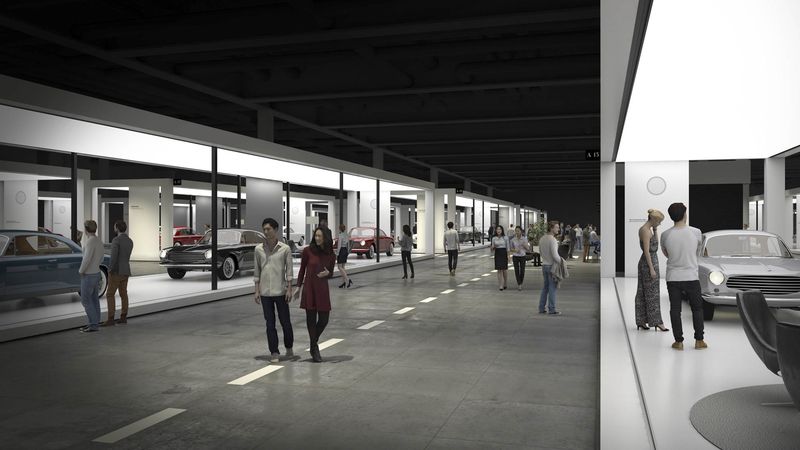 Just what you didn’t know you always wanted: an Art Basel for cars.

MCH Group, which presents the annual Baselworld watch show in Switzerland and Art Basel art fairs around the world, has finalized a contract with the City of Miami Beach, Fla., to hold a new trade show centered around 200 of the world’s “masterpiece” cars.

“We very carefully looked at the success of Art Basel, which is the most successful product of MCH at the moment, and wanted to convert them in a way to set up the similar concept for automotive masterpieces,” says Mark Backé, the global director of the event. “This is the next big thing when you look at the big collector markets of the world.”

Grand Basel Miami Beach will showcase cars from the past, present, and future, according to event organizers. Visitors will come to the exhibition halls to look at rare and thrilling vintage cars and get a sneak peek at technology still to come. It’s scheduled to run from Feb. 22-24, 2019, following an inaugural “Grand Basel” show from Sept. 6-9, 2018, in Basel, Switzerland. Dates in Hong Kong will be announced as well.

Art Basel counts 60,000 participants over its weeklong stretch in Miami each year in December.

The cars at the event, which will be held in the Miami Convention Center, will be offered for sale only by special, invited dealers and brokers. No auction houses, such as Gooding & Co. or RM Sotheby’s, have said they will participate, though a spokesman for Grand Basel Miami Beach says “we can’t rule it out.”

Doing the inviting is a secret panel of advisers based in Zurich. Paolo Tumminelli, the director of the Goodbrands Institute and the primary impetus behind the development of Grand Basel, is chairman of the board: “It will be our mission to establish the automobile as a cultural asset,” he says. One headline name, actor and car enthusiast Idris Elba, has already lent his support.

The event will be so exclusive, Backé says, that dealers aspiring to attend cannot simply just book a space.

“It’s an application process,” he tells Bloomberg this week by telephone from Zurich. “They give us the data about the various cars they would like to entertain. Then we hand over the data to our advisory board. They make the choice. They say, ‘This is interesting; this is not interesting.’ It’s not like a regular trade show.”

Early critics have called Grand Basel a knockoff of the Pebble Beach Concours d’Elegance that will pale in comparison to the real thing. Pebble Beach has been held for decades along California’s picturesque Big Sur coastline; it’s famed for parking epic rows of 20 or more multimillion-dollar historic Ferraris on the lawn of the iconic golf club. It has long been characterized, along with the Villa d’Este at Lake Como, Italy, as the most prestigious automotive event in the world.

“There is a whole global market of millions of car collectors who keep Pebble Beach and Amelia Island [Concours d’Elegance] relevant,” says Ian Kelleher, the chief marketing officer for RM Sotheby’s, which holds one of the grandest auctions at both of those events. “This Grand Basel event resonates with only a small, niche area of collectors.”

The implication is that there are nowhere near enough people in the world who will be interested in and able to attend a new tradeshow for blue chip automotive investments, though he noted that maybe over time a following would develop.

For what it’s worth, Pebble Beach organizers say they don’t see a conflict—in large part because you don’t buy cars at the Pebble Concours itself, just at surrounding auctions in prior days.

“From our perspective, these car events are not in competition with each other,” says Pebble Beach Concours Chair Sandra Button. “As car enthusiasts, we are all in a race to save our automotive past and to share our love of cars with new generations. We’ve been excited to see the growth of collector car events around the world in recent years. We encourage every effort to help people share and celebrate great cars.”

And Backé says the comparison is inaccurate altogether.

“Pebble Beach is a beauty contest,” he says. “Grand Basel is not a concours, not a beauty show like Pebble Beach. You go when you have the idea in mind to buy something. To invest in something.”

Rather, Grand Basel will focus on traders, dealers, and investors attending with strong impetus to buy.

Indeed, the classic car sector has grown more than 457 percent over the past decade, according to a 2016 report from the Knight Frank Luxury Investment Index. Luxury car brands such as Porsche and Bentley often cite Miami among their top two or three U.S. markets, along with Los Angeles and New York. A short drive through Miami’s Brickell arts district or attendance at one of its weekly car gatherings offers strong, if anecdotal, evidence.

Kelleher remains unpersuaded. “I’d love to do a car show around Art Basel,” he says. “But this feels forced. I don’t think replicating Art Basel like this is the answer.”

Kelleher says the pool for buyers to attend a trade show such as what MHC has planned is prohibitively small. And where organizers for Pebble Beach and the Amelia Island Concours d’Elegance don’t depend on selling cars to survive (dozens of peripheral auctions do), Grand Basel Miami Beach may struggle to convince people to buy. At least during its first year.

A representative from Gooding & Co. did not respond to a request for comment by the time of publication of this story.

Bloomberg, Hannah Elliott, 16.05.2018. “There Will Soon Be an Art Basel for Cars :Not everyone is persuaded it is a good idea.”

Image : Eighty percent of the cars at Grand Basel will be for sale, via a trade show that’s invite-only. Source: Grand Basel/Blue Scope